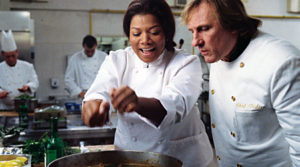 “The poor baby turnip – nobody likes them. Of course, life is easy if you are a truffle or a shitake mushroom. But the turnip is to be loved because she is a self-made woman of vegetables. All the others, you can only destroy with cooking; but the turnip, she gets better. So, you see, it’s not how you start, it’s how you finish!” – Chef Didier in Last Holiday

‘Georgia Byrd’ makes a major life change when she’s told that she only has 3 weeks to live. Her public temper tantrum was misunderstood by those who witnessed it and her frustration in not getting an immediate and divine answer to her ‘Why me, God?’ question compelled her to do all the things she’d been putting off.  It was her dramatic response to this devastating news that got my attention and remained in the back of my mind as I watched her fully enjoy what she thought were her last days. It was ironic to me that it took a pronouncement of impending death to provoke her to really live, and even more ironic that her reactionary response to bad news positioned her to transition her ‘Book of Possibilities’ into her ‘Book of Realities’.

The Turnip Monologue by ‘Chef Didier’ in the middle of the kitchen scene became a wonderful parable about becoming better by enduring hardship. The heat that “can only destroy” the other vegetables (according to Chef Didier) is the very thing that makes the turnip better. Although the turnip doesn’t have the privilege of affirmation as the truffle and the shitake mushroom do, its difficult beginning is the fuel that lights the fire to cook it into its beautiful end. Watching ‘Georgia’ push beyond her fears and leap out of the box that she’d been living in all of her life was exciting. It was ironic to see all of the elements come together in one place as she boldly processed through a plethora of challenges and discovered her ‘real self’. It was the heat of her devastation that provoked her into realizing her purpose.

Because God establishes the end from the very beginning, He knows that the heat that is coming our way will only make us better – He has ordained it for that very purpose! As I thought on this truth, David came to mind. From parental rejection to attacks by leadership, from father-in-law setups to uprisings of followers, David experienced an extended period of life ‘in the heat’. The pressures that he experienced would have taken out a lesser man; however, David was anointed to endure the pressure that would ultimately make him a brilliant diamond as the king of Israel.  When we know the truth that God is Sovereign, we recognize that the trouble that comes our way is allowed by God Himself because it’s purposed by Him to promote us into our purpose. Like the turnip, the cooking only makes us better and postures us to embrace God’s plan to turn our Possibilities into Realities!