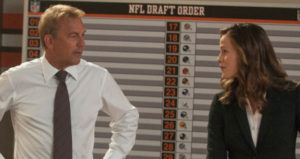 “Sometimes the correct path is the tortured one.” – Allie in Draft Day

‘Sonny Weaver, Jr’ is the General Manager for the Cleveland Browns and son of the legendary former Browns Coach, ‘Sonny Weaver, Sr.’. Struggling with the desire to ‘just create the team he wants’, he finds himself pressured by Browns fans and commentators, pressured by the new Browns coach (who he can’t seem to get along with at all), pressured by the players who want to join the Browns organization, pressured by his newly widowed mother, pressured by the Brown’s Owner and pressured by general managers of other teams who want to take advantage of what they see as his desperation. It’s Draft Day, and Sonny knows from the very beginning what choice is best for the team, but he is questioning himself about what choice to actually make because of all of the pressure. He makes the ‘splash’ that the Brown’s owner provoked him to by turning the First Round, Number 7 pick into the First Round, Number 1 Pick. Although the majority is initially ecstatic about this move, he’s upset a major applecart and gone against his ‘first mind’. It is when he selects ‘Vontae Mack’ with his First Selection (whom he could have gotten at Seventh Pick and still had his First Round Picks for the next 3 Years) that his confidence in himself is really shaken. It is ‘Allie’, his biggest fan and best supporter (who also represents a major personal struggle for ‘Sonny’) who reminds him that he sees what others don’t see and that it’s what he thinks that really matters.  ‘Sonny’ goes on to take what others view as his ‘greatest fumble’ by not selecting the obvious Number 1 Choice and turns it into an history-making touchdown by getting ‘Vontae Mack’, Running Back ‘Ray Jennings’, the son of a former Browns player (dubbed as ‘Browns Royalty’), assistance on Special Teams through a trade negotiation of ‘David Putney’ (Punt Returner) and all of his First Picks!  Those who were killing him in the beginning were the same ones who were celebrating him in the end.

When what others think is not based on what you see, it’s inevitable that there will be opposing opinions. Just as ‘Sonny’ wrote out his vision at the beginning of the movie (‘Vontae Mack’ No Matter What), we must record what God has given us at the beginning so we can stand on what He said regardless of the circumstances.  Although there are several people who had the opportunity to ‘see what Sonny saw’, there were only 3 people who actually took advantage of the opportunity – ‘Sonny’, ‘Allie’ and ‘Coach’ who only saw the little yellow slip of paper with ‘Sonny’s’ scrawled note after the selection had been made. The others, who were all impacted by the choices being made, were reactionary – acting out of what they thought they knew  at that given moment and missing the broader picture and the possibilities.

The road ‘Sonny’ took to get to where the team landed was not an easy road. It takes courage to stand alone on what you know and make the correct choice when everyone has positioned themselves against you.  It is another story behind the story that cements this truth when ‘Sonny’ finally shares with ‘Allie’ that he fired his father as Brown’s coach not because he hated him, but because his mother asked him to. His father refused to retire from coaching at the doctor’s prompting, so ‘Sonny’ made the correct choice and fired his father – never telling him that it was at his mother’s request and never explaining to anyone the reason for his action. He told ‘Allie’, “It was either more time with my mother, or him on the sidelines of some game, dying on national television. I chose my mom.” It was a difficult choice, but he made it and stood on it.

God is always speaking to us about His plan for our lives. Hearing His voice and walking out His plan positions us to walk into His promises. The road will not always be easy… “Sometimes the correct path is the tortured one.” And those who stay true to the vision and stand on what God said will have the courage to choose that difficult path and travel it with grace.