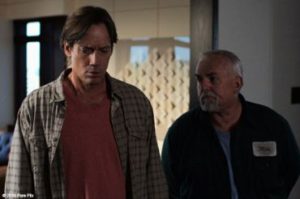 ‘Ben Walker’ walked away from his calling, walked away from God and walked away from the love of his life – and all for the love of money and what he thought was a great opportunity. A few years later, he had accumulated lots of money, a high-powered position, expensive toys and his choice of women. He thought he was enjoying the best that life had to offer until God sent an angelic messenger to guide him through the life he’d walked away from. It was during this second chance that he realized that what he had acquired was worthless, what he’d counted valuable in his life was actually meaningless, and what he really wanted was the life and ministry he’d left behind.

Confession and Repentance… two very simple things, really; but ‘Ben’ discovers that what is simple can be incredibly difficult as he finally works through the challenges he left behind in the life he’d rejected. God is so gracious that as ‘Ben’ is helping someone else grasp the blessing that is God’s unconditional love, he is fully enlightened himself of just how far down God will reach to redeem the lost who will just ask for His forgiveness. He realizes as he explains to someone else that even Judas, Jesus’ betrayer, could have received God’s forgiveness if he’d only asked.

It is in these 5 words, “It’s simple; it’s just hard” that we find ourselves at the juncture in the road. God offers us a road to restoration that is given as a gift; we must choose to accept it. Both guilt and pride are strongholds that can embed themselves within us and cause us to reject the gift and The Gifter. Guilt will tell us that we don’t deserve the gift of restoration; but the wonderful thing about gifts is they are not earned. Gifts are given because of the graciousness of the giver. The recipient is extended a reward that was never earned and in some cases could never be earned. Pride, the correlating contrast to guilt, strategically holds us in a place of denial, a place of unrepentance, where we refuse to confess our wrongs, refrain from committing our ways, and refute the compulsion of walking in God’s will for our lives. Pride causes us to stoically stand on shifting sands and pretend that we have sure footing. Releasing our way and relinquishing to God’s will is a simple act that only requires our surrender – it’s just hard because we long to control. But when we take hold of the reigns of our will and sincerely confess to God, our heart is then led to the place of repentance where we relinquish our will to position ourselves to adopt His will. Sometimes it’s hard; but it really is just that simple!

I Am Empty... Can We Go Shopping?
"Glory to GOD, Who is able to do far beyond all that we could ask or imagine by His power at work within us." Ephesians 3:20 (Common English Bible) | Lady AJP Ministries - Concord, NC © 2020 | Empowered To Enlighten; Encourage; Empower You - 'Impacting Lives Through The WORD!'
↑