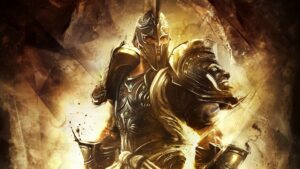 This week, Presiding Elder Hanna Broom preached at the 15th Annual Martin Luther King, Jr. Interfaith Worship Service at Saint James Presbyterian Church, USA in Greensboro, NC and although I wasn’t there, watching the replay blessed me tremendously!  The point for reflection was the definition she shared of the word ‘forged: produced under a very intense and extreme condition’.

2 Samuel 23:10 reads, “He arose, and smote the Philistines until his hand was weary, and his hand CLAVE unto the sword: and the Lord wrought a great victory that day; and the people returned after him only to spoil.” (King James Version)  Various versions give us different perspectives of his ‘cleaving hand’.  Some say his hand FROZE (New International Version), CLUNG (English Standard Version), STUCK TO (New King James Version), CRAMPED/EXHAUSTED AND COULDN’T LET GO (Contemporary English Version) and ADHERED TO (Webster’s Bible Translation).

Having heard her definition and then reading the various translations of the scripture focus, I was immediately empowered!  What Eleazar experienced was my example to follow.  It was when the men of Israel fled that he arose and fought.  It was when the exertion of fighting the battle brought him to a place of exhaustion that his hand became forged with the sword.  When I become weak it is imperative that I allow the exertion of the fight to cause the forging of my hand to God’s Sword – His Holy Word!  It is the Word of God that will empower me to keep fighting as the victor He designed me to be and position me to walk into my ‘more than a conqueror’ status.  This understanding brings a whole new light to 2 Corinthians 12:10 which says, “Therefore I take pleasure in infirmities, in reproaches, in necessities, in persecutions, in distresses for Christ’s sake: for when I am weak, then am I strong.”  Infirmities, reproaches, necessities, persecutions and distresses are oftentimes battles we must choose to stand and fight individually – in the midst of them we may be lonely, but we are never alone… For in our weariness, when we actively pursue God’s Word and intentionally practice God’s Word, the acts through us merge with the acts against us to ‘FORGE’ our strength connection. It is through that very intense and extreme condition that God will work His victory and manifest His child as a champion!  So when I’m weary and thoughts of surrendering to the opposition enter my mind, like Eleazar, I will rise up, embrace God’s Word and stand my ground!!!  I Will Fight On!!!