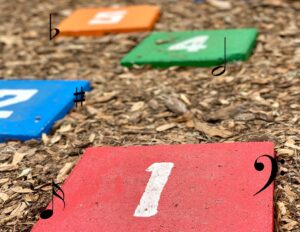 The number system is really easy – once you get it in one key, you’ll know it in all keys.  (Example: “Do Re Mi” from ‘The Sound of Music’ This song teaches the concept of melody.) It’s what we call a moveable scale or transposing a scale up or down. When this is done, the song will have the same ‘contours’ regardless of the key in which it is played. Numbers really help when it comes to what a lot of people would call cheating when you transpose songs.  It’s recommended that you learn to play in all keys. Some keys people don’t like to play in, so they have to cheat. Another ‘cheat’ option is to use the transpose key.

Your 1 Chord is your home chord. This chord is sometimes called the ‘Tonic’, which is a scale degree name. Most of the time, this is where a song starts and it immediately denotes the key. Sometimes you have to find the 1 Chord because it’s not always the first chord. Home, or the 1 Chord, is a place of rest; it’s where a progression will return to whether it’s a phrase, longer than a phrase, or the whole song. It’s called the home chord, because everyone always wants to return home.

Your 5 Chord is one of your next most important chords whether major or minor. This chord has a strong pull to the 1 Chord. We can think of it as a parent/child or Christ/humanity relationship.  Regardless of the length of the relationship, the child can always go back to the parent and mankind can always go back to Christ. This move is called resolving… where 5 is the most tense chord after moving away from the 1 Chord, and 1 is the resolve chord that it wants to get back to. (Example: “Safe In His Arms” by Rev. Milton Brunson & The Thompson Community Singers)

All chords never have to go where they typically go, but they can go wherever they want… just make sure the move makes sense sonically and logically. Chords have a certain way they like to move… when you try to deviate from their destined path, it’s hard to do because of where they want to go back to. If you want to do something outside the box, just make sure you’re careful and it makes sense.