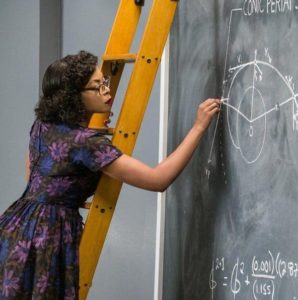 “So yes, they let women do some things at NASA, Mr. Johnson. It is not because we wear skirts; it’s because we wear glasses!” – Mrs. Katherine Johnson (Taraji P. Henson) in “Hidden Figures”

Katherine is one of three African American female mathematician friends who skillfully use their gifts with numbers to assist the Unites States Government in ‘The Space Race’ in 1961.  The accuracy of the numbers given as re-entry coordinates for Astronaut John Glenn (Glen Powell) to return to Earth’s atmosphere was a secondary pressure to Katherine as she dealt with the prejudice of those who counted on her individual knowledge for the success of the whole team.  From having to run across the compound to use the bathroom, to having to drink coffee from a separate coffee pot, to having to calculate figures from redacted information, this brilliant mind lived beyond the insults and emotional injuries to produce quality work that consistently placed her in the forefront despite the attempts of her ‘peers’ to keep her hidden.

Although there are many jewels scattered throughout this movie, this quote is one of my favorites.  It was in a personal moment that Katherine tells Mr. Johnson (Mahershala Ali) the reason for their unusual access after he inadvertently insults her.  Mr. Johnson immediately recognizes his faux pas and tries to correct his misdirected statement; however, we can understand his surprise… women working on the NASA compound in 1961 is surprising; Black Women working on the NASA compound in 1961 is extremely surprising!  But Katherine quickly informs him that gender plays no role in their unusual access.  Their intelligence opened a door for them that was otherwise absolutely closed on every level.

The reason for this open door gives us great insight.  We are often guided by what we can physically see.  We typically embrace things because of how they look and reject other things because of how we see them.  But what are we actually missing when our assessments are based on surface observations?  Katherine would have us to know that we miss ‘the most valuable thing’!  Her statement solidifies the truth that what we see externally is the smallest part of any equation.

Paul tells us in 2 Corinthians 4:7, “But we have this treasure in earthen vessels, that the excellency of the power may be of God, and not of us.”  It is not what can be seen on the outside, but the hidden treasure within that is excellent, powerful, valuable!  Our earthen vessels are merely containers and God has gifted each of us with a part of Himself.  It is when we allow the power of God full reign in our lives that God within us is manifested greatly through us; thereby, activating His plan, fulfilling His will, completing His purpose.  What we see may be easily discounted, devalued, dismissed; but it’s what we can’t see that really determines value.