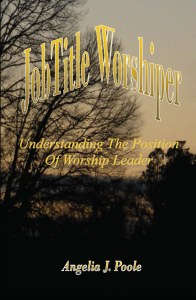 We were originally designed by God, for God. We have an inalienable legacy of bearing His image… He desires for us to also bear His character. He desires this so much, that in Romans 8:29, Paul writes, “For whom He foreknew, He also predestined to be conformed to the image of His Son, that He might be the firstborn among many brethren.” It’s a ‘Family Affair’ where we all are recognized as ‘relating to God’ and progress towards being conformed into ‘His image’… where we don’t just look like God, we also act like God – we progressively assume His character.

In our inaugural session of ‘The Relationship Series – A Virtual Conversation’, we will be discussing man’s initial interactions with God and God’s original intent for relating with us. This study will be based on Book #1 in the series, “JobTitle Worshiper: Understanding The Position of Worship Leader.” Join us on Wednesdays in this engagingly interactive virtual book study!

I Am Empty... Can We Go Shopping?
"Glory to GOD, Who is able to do far beyond all that we could ask or imagine by His power at work within us." Ephesians 3:20 (Common English Bible) | Lady AJP Ministries - Concord, NC © 2013-2022 | Empowered To Enlighten; To Encourage; To Empower YOU - 'We're Impacting Lives Through The WORD!'
↑